ACCBAT aims at reducing the use of fresh, good quality water in irrigated agriculture, in order to preserve it for direct human consumption. Improvement of water demand management and increase of water resources availability, through re-use of urban treated wastewater, are the two main approaches chosen to reach the objectives of the project, as good practice in countries subject to water scarcity events and as mitigation measures to the impacts of global climate change. International experts will support training and research activities, and contribute to final dissemination of results.
The project ACCBAT total budget is 4,99 million Euro and it is financed, for an amount of 4,49 million Euro (90%), by the European Union (ENPI CBC Mediterranean Sea Basin Programme) through the European Neighbourhood and Partnership Instrument.
Home   /   ACCBAT 2nd International Conference – press release 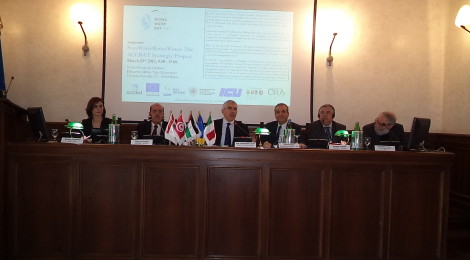 Second International Conference of the ACCBAT Strategic Project: Mediterranean Institutions discuss on water management in the framework of the WWD 2015.

Monday, March 23rd 2015, the Conference SaveWaterReuseWater: The ACCBAT Strategic Project was held at the Italian Geographical Society in Villa Celimontana, in Rome. The meeting was organized by ICU – Istituto per la Cooperazione Universitaria Onlus, in collaboration with the Council for Research and analysis of the agrarian economy (CRA – INEA), on the occasion of the World Water Day 2015 established by the United Nations and under the patronage of Expo Milano 2015.

The event was attended by Pier Ferdinando Casini, President of the Permanent Commission on Foreign Affairs and Emigration, Mario Cospito, Diplomatic Counsellor at the Ministry of Economic Development, Karim Khalil, Chargé d’affaires of the Embassy of Lebanon to Italy, and by delegations of the Ministries of Agriculture of Jordan, Lebanon and Tunisia that are ICU partners in the international project ACCBAT(Adaptation to Climate Change through improved water demand management in irrigated agriculture by introduction of new technologies and best agricultural practices).

In his speech, the President Casini stressed how water is a fundamental issue such as oil, more than the oil, and how we need a democratic commitment and new projects ideas by NGOs in the Mediterranean to contribute to maintain a balance between the water and its potential use. The President expressed appreciation for the ACCBAT Project and for the dialogue among institutions that promotes and contributes to political stability in the Mediterranean.

Mr. Luca Palazzo, representative of the Autonomous Region of Sardinia, managing authority of the ENPI CBC Med Programme financing the ACCBAT Project, the Director General of the DG Rural Development of the Ministry of Agriculture, Food and Forestry, Giuseppe Cacopardi the Deputy Commissioner of the CRA – INEA also attended the Conference.
This conference was the second of the ACCBAT Project. The first one was held last October in Nabeul, Tunisia, with the aim to deepen and strengthen cooperation between the Mediterranean countries. After the greetings and a session dedicated to cooperation in the Mediterranean basin an entire session has been dedicated to the advancement of the project and another session on the management of treated wastewater in the Mediterranean countries took place.
On the occasion of the event, the Italian Geographic Society has also hosted an exhibition on historical irrigation systems in Italy.