ACCBAT aims at reducing the use of fresh, good quality water in irrigated agriculture, in order to preserve it for direct human consumption. Improvement of water demand management and increase of water resources availability, through re-use of urban treated wastewater, are the two main approaches chosen to reach the objectives of the project, as good practice in countries subject to water scarcity events and as mitigation measures to the impacts of global climate change. International experts will support training and research activities, and contribute to final dissemination of results.
The project ACCBAT total budget is 4,99 million Euro and it is financed, for an amount of 4,49 million Euro (90%), by the European Union (ENPI CBC Mediterranean Sea Basin Programme) through the European Neighbourhood and Partnership Instrument.
Home   /   Beirut (Lebanon) – Signing ceremony of the IWQI agreement and visit to Ablah 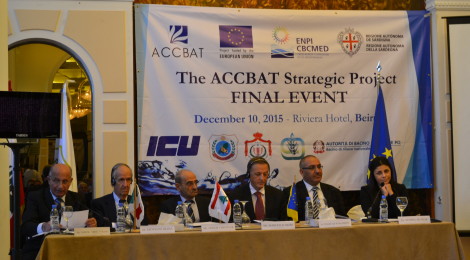 On December 10, 2015 was held in Beirut, the final event of the ACCBAT project.

Attended by 100 participants, including representatives of the European Union Delegation in Lebanon, the Autonomous Region of Sardinia – Managing Authority of the ENPI CBC Med, FAO, Lebanese Ministry of Agriculture, the Municipality of Ablah, universities, NGOs and local enterprises, journalists and farmers beneficiaries of the project, the activities carried out by ICU and its partners: NCARE – National Centre for Agricultural Research and Extension in Jordan, the Lebanese Ministry of Agriculture, the Ministry of Tunisian agriculture and the Basin Authority of the Po River in Italy (ADBPo), were presented.

The final version of the Irrigation Water Quality Index developed within the project in collaboration with the University of Padua and all project partners was also presented at the event. The Index is a tool created to guide the use of treated wastewater in agriculture in Jordan, Lebanon, and Tunisia in relation to their quality taking into account the technical requirements and national and international agronomic, health and management recommendations.

An agreement on the promotion of this instrument in Jordan, Lebanon and Tunisia was signed in the afternoon the representatives of the three partners of the southern Mediterranean present in Beirut: the Lebanese Minister of Agriculture, H.E. Akram Chehayeb, the General Director of NCARE, Dr. Fawzi Al-Sheyab and the Director at DG-GREE the Tunisian Ministry of Agriculture, Dr. Najet Gharbi signed the agreement proposed by ICU and the ADBPo.

On December 11th, the official opening of the basin of 15.000m3 for the collection of waste water treated at Ablah took place in Ablah. The mayor of Ablah and the ACCBAT project coordinator, Dr. Lorenzo Errighi, ICU inaugurated the site surrounded by all 30 farmers of the irrigation perimeter of Ablah, beneficiaries of the project, and all the representatives of the partners ACCBAT.

ACCBAT (Adapting to climate change by improving the management of water demand in irrigated agriculture with the introduction of new technologies and best agricultural practices) is a 3-year project with a total budget of EUR 4,998,952.50 promoting environmental sustainability through increased water efficiency, reuse of treated wastewater for irrigation in Lebanon, Jordan and Tunisia. The project is co-funded by the European Union (90%) under the ENPI CBC MED, of which Sardinia Region is the Managing Authority.