ACCBAT aims at reducing the use of fresh, good quality water in irrigated agriculture, in order to preserve it for direct human consumption. Improvement of water demand management and increase of water resources availability, through re-use of urban treated wastewater, are the two main approaches chosen to reach the objectives of the project, as good practice in countries subject to water scarcity events and as mitigation measures to the impacts of global climate change. International experts will support training and research activities, and contribute to final dissemination of results.
The project ACCBAT total budget is 4,99 million Euro and it is financed, for an amount of 4,49 million Euro (90%), by the European Union (ENPI CBC Mediterranean Sea Basin Programme) through the European Neighbourhood and Partnership Instrument.
Home   /   The ACCBAT Project: an example of development cooperation 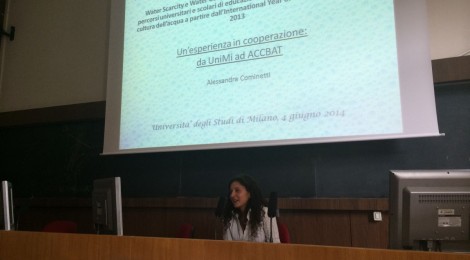 The ACCBAT Project: an example of development cooperation

Since February 2014, ICU has been implementing a series of seminaries in Italian major Universities (Bari, Firenze, Milano, Napoli, Pisa, Reggio Calabria, Salerno, Viterbo) in the framework of the WSWC project “Water Scarcity and Water Cooperation in the Mediterranean basin”. It is a Development Education and Awareness Raising project addressed to Italian students and co-financed by the Italian Minister of Foreign Affairs that ICU proposed and developed in order to further promote the visibility of ACCBAT in Italy and to establish a participative dialogue on water issues too.

The seminars focused on issues such as water shortages and climate change within the Southern Mediterranean countries (with a special attention to Jordan, Lebanon and Tunisia), similarities with problems affecting EU countries, common projects and partnerships. In each seminar, a great emphasis was given to ACCBAT, reinforcing its visibility and profiting from different experiences by all the actors involved in other cooperation and/or research projects on water issues in the Mediterranean basin.

In particular, on June 4th, 2014, ICU held a WSWC seminar at the University of Milan with the participation of Daniele Bonetti, ACCBAT Communication Manager, and Alessandra Cominetti, former UniMi student and actually staffed on ACCBAT project in Lebanon. She shared her experience and presented all the ACCBAT partners including the donor (EU), the Programme (ENPI CBC Med) and the JMA (Regione Sardegna). Moreover, she gave an exhaustive explanation of all the running project activities as a starting point for a discussion about development cooperation with professors and students.

← Water is not a commercial product
Stories from the field – Jordan →