ACCBAT aims at reducing the use of fresh, good quality water in irrigated agriculture, in order to preserve it for direct human consumption. Improvement of water demand management and increase of water resources availability, through re-use of urban treated wastewater, are the two main approaches chosen to reach the objectives of the project, as good practice in countries subject to water scarcity events and as mitigation measures to the impacts of global climate change. International experts will support training and research activities, and contribute to final dissemination of results.
The project ACCBAT total budget is 4,99 million Euro and it is financed, for an amount of 4,49 million Euro (90%), by the European Union (ENPI CBC Mediterranean Sea Basin Programme) through the European Neighbourhood and Partnership Instrument.
Home   /   Tunisia: The Ministry of Agriculture of Tunisia inaugurates the demo plot for the use of brackish waters for irrigation realized by ICU in Mahdia 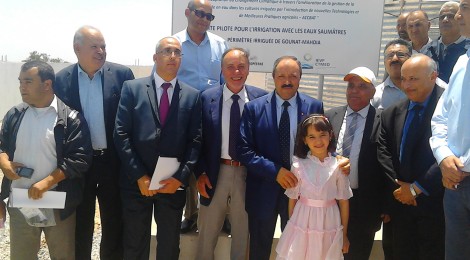 Tunisia: The Ministry of Agriculture of Tunisia inaugurates the demo plot for the use of brackish waters for irrigation realized by ICU in Mahdia

ACCBAT (Adaptation to Climate Change through improved water demand management in irrigated agriculture by introduction of  new technologies and best agricultural practices) is a strategic project launched by ICU in December 2012 funded by the European Union under the program ENPI CBC-Med 2007-2013.

Specifically, the ACCBAT project in Mahdia build a desalination unit able to reduce the amount of salt in water from 5.8gr/l to 0 for about 200m3 of water per day. The plot has been also equipped with a 600m3 water storage for the mix of desalinated water and brackish water. This water, with reduced salt concentration (about 1.5gr/l) will then be used by 60 farmers for the irrigation of greenhouses crop such as tomatoes and cucumbers avoiding the current and consistent soil degradation and limited revenues of farmers do to the limited kind of crops they can grow. The unit will also avoid the waste of fresh water for irrigation, a solution often used by farmers to avoid extreme salt concentration in soil.

Comments are closed, but trackbacks and pingbacks are open.